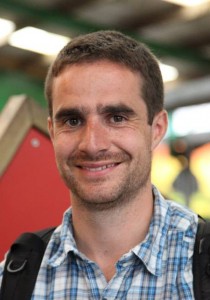 George Mahood is an award-winning writer. Specifically, he was placed third in the Little Brington Village Fete’s limerick competition (Under 11s category) in 1988. It was the same year that Mrs Marriott’s legendary fruit loaf was beaten in the WI cake contest for the first time in six years.

George studied Communication Studies and English Literature at Leeds University. After spending a year travelling in the USA (with clothes and money), he worked for several years in a variety of jobs including charity fund-raising and garlic bread making. He currently works as a photographer, specialising in weddings. George has been the lead singer and guitarist of a rubbish band and the chairman and midfielder of an awful Sunday-league football team.

George has plenty more madcap ideas that will form the basis of future books. Follow him on Twitter and Facebook to keep in touch, see more photos, and to hear about future projects.

** George doesn’t normally talk about himself in the third person. He copied and pasted this bio page from Amazon **